A downloadable game for Windows, macOS, Linux, and Android

Ratty always wanted to visit London and one day he got the chance to hitch a ride on a Jumbo out of Manchester, and he took it. Unfortunately the decision to stow away for free in the cargo hold turned out to be the worst decision he'd ever made. During a terrible storm the cargo doors of the plane blew open and Ratty and his suitcase tumbled out of the plane. Ratty parachuted to safety but his tat (aka. luggage) had been scattered all over the city.

He'd never visited London before but now Ratty was required to explore every nook and cranny of the huge capital in an effort to recover all of his lost items. Not great timing as his tummy was rumbling and he was so very hungry, having not had chance to scoff an airport meal, being a stow away and all.

Can you help Ratty recover all his luggage before the poor mite pops his clogs due to cheez needz?

Rat-a-Tat is a tiny sprite platform game where you must go on several sorties through London looking to find your lost luggage, avoiding various nasties and keeping your tummy topped up with enough cheez to last till the end of each trip.

Don't worry if you miss any items as you can always visit the same areas along another search route. Don't forget you are a tough cookie but also a terrible swimmer with a weakness for cheez.

Also Special Thanks to...

...and also everyone else who's helped me at all along the way.
You know who you are. Cheers.

Here is my little tribute to your game...

Really enjoy this one. Best game so far? Maybe! Thank you dude.

Beat this last night. All Luggage rat-rieved, and there was still time to go clubbing! \o/

Very enjoying with smooth gameplay and fab music. True ZX128 game, not running on 48k versions. I tested this with some ZX clones as well like Harlequin etc. without issues. I like it.

I'm really glad you're enjoying it. Good to know it works on different machines. Hope you have fun.

Quite enjoying this but I've noticed some (possible) bugs: you can't go back to a screen previously visited; after losing a life, Ratty sometimes starts at a different part of the screen than he actually entered from; the animated arrows and "whiff" from the cheese remains when the object is picked up

Glad you're enjoying it. The game would be too easy if you could go back. It doesn't cause a problem as you'll see once you get further into the game. When he dies he always restarts in the same place. It avoids and multiple death problems which occur in games like Jet Set Willy. The arrows remain so that you know very quickly that the luggage has already been collected. The 'whiff' is actually gnats hovering over the cheese. They still hang around as the "whiff" is still there. Cheers, I love the 8x8 sprite style and not just because I think it looks great. It's better for collision detection and allows for a lot more sprites on the screen at the same time. I think it also gives you more space to explore in each screen too. The next few games will also use 8x8 sprites and then when I finally get around to doing a Percy Penguin sequel I'll revert back to 16x16 as the graphics will need that scale of detail.

since 80's i preferred wasd keys

I like that for 3D games like Doom where you can go in at least 4 directions. This is simple just left, right and jump. I don't think QW and space for jump is too bad personally, like Manic Miner, Jet Set Willy, etc. I think they're easy to get used to with a bit of practice. 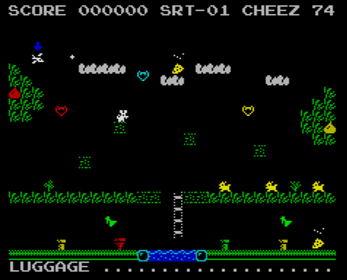 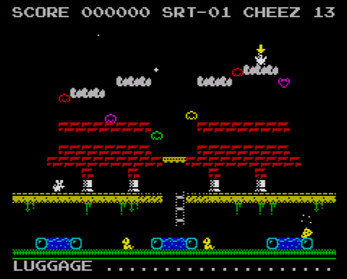 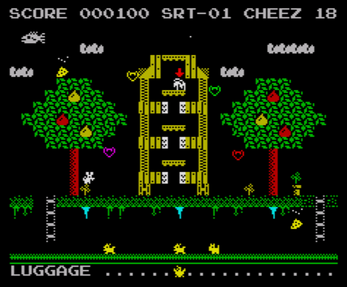 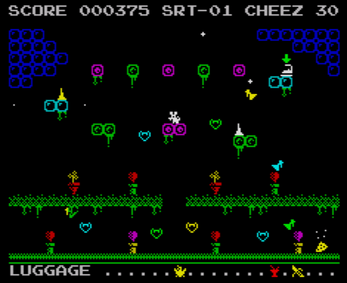