A downloadable game for Windows, macOS, Linux, and Android

Difficulty - It's for Kids.

You are Alien Slaphead

You landed on earth on a one way ticket with the intent of spying on it's inhabitants in preperation for war and planetary takeover. But you fell in love with the kindness of humans. Especially a fantastic little boy named Joe, well who else, who taught you about the wonders of the world. You decided to abort the mission and report back to your superior slapheads informing them that the planet was not yet ripe for colonisation.

But your spaceship was out of fuel so to return back to your dimension in space you must collect various items which you can convert to fuel and leave the planet and it's people unharmed.

As most knowledgeable people are aware, a slaphead needs a constant supply of helium to survive as he cannot breath the natural atmosphere. Fortunately a large supply of helium packs were jetisoned from your ship, for use during your stay, before you landed.

Part of your mission was to build up your KOT (Knowledge of Terra) whilst on the planet and report back your findings. Hopefully you have learnt a lot as in order to retrieve the extra rocket fuel also contained in helium packs you must pass a KOT test.

Your mission will begin at 11:55pm December 31st, New Years eve to take advantage of the celebrations for your cover, allowing you to go unnoticed whilst searching for fuel on the way to your spaceship. Trouble is a bunch of other aliens on earth have noticed your bald, shiny, green slaphead.

Your aim is to find your spaceship, in the depths of a dormant volcano, with enough fuel to leave and an A1 U.R.A. Ranking to your name to prove your KOT is second to none. Your mission will then be deemed a success with or without the colonisation go ahead.

Alien Slaphead is a tiny sprite platform game for kids. You control Slaphead and must reach the helium tank, which provides helium, bonus rocket fuel on answering a KOT question correctlym and advancement to the next stage of your journey. You can also pick up items on the way which can be converted to rocket fuel too. Answering questions correctly and collecting items to boost your fuel level is vital as it directly correlates to your U.R.A Ranking at the end of the game, whether you complete it or not, and nobody wants to be known as a U.R.A Rotting Slug. So good luck in returning home in your rocket, slug face.

...and also everyone else who's helped me at all along the way.

You know who you are. Cheers once again.

Cool game. What tools did you use to build this game?

I used a fork of AGD called AGDx Mini. I've used it for everything besides my first game which was in AGDx.

Had fun, even finished it! Kids game... more like Hitch game :p

Also had issues with Kempston, doesn't work at all on the questions so I went KB.

Thanks mate.  I really should start testing the games with a joystick. Got too used to playing speccy games with the keyboard. Do you remember what rating you got at the end?

I do not, but i got one question wrong... I said Brain! and I did miss some items. I have a VoD though :)

Is VoD a video of the game? I'm not great with acronyms LOL. I'll have to check it out :)

Nice and cute game, thanks man!

Completed it on my Spectrum 128K and CRT monitor yesterday. I played with Sinclair joystick and it was really hard to select the questions. When I pushed the stick several times up, I could get to select question one and same with question 3. It is some kind of bug there I think. The keys to select questions did not work. The joystick works fine in the game.

Oh really. When I tested it the keys worked every time T for top, M for middle, B for bottom. T is joystick up, M is fire and B is joystick down nut I haven't tested that. Maybe try with the keyboard controls only and see if that is any better.  If you can answer the questions easier then you will get a better U.R.A at the end of the game. If you have children or relatives with children you could ask them to play it. I made the game quite easy. Well easier than my other games so that children could have fun and education with it :D

Thanks! I got it. To me this is not so intuitive. It would be better when the alternatives came, move joystick up and down and press fire to select the answer. I also though that the letters there where the ones to use on the keyboard but it is the in game keys that work for selecting. When my daughter come to me next time we will play it together. I think it might be a little hard for her, even if the game is quite easy. At least the questions will be fun :)

I'm confused. Moving the joystick up and down and pressing fire to select the answer when they appear is how it should work.  Also it is the letters next to the answer which you use on the keyboard to choose the correct answer. 'T' for top, 'M' for middle and 'B' for bottom.  It's from a famous gameshow in the UK called Strike It Lucky. The only in game key is the 'M'.  Left and Right in-game is 'Q' and 'W', these cannot work to select answers as I've assigned the other keys. I know for sure it works fine on keyboard as I tested it out today and it works as it always has. So I'm not sure what's happening with your version. How are you playing it? Emulation or real hardware, and if real hardware which mode of the Spectrum? 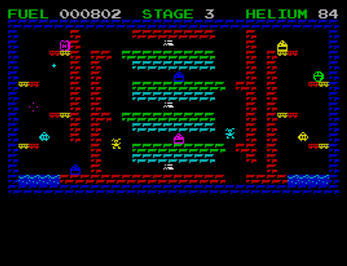 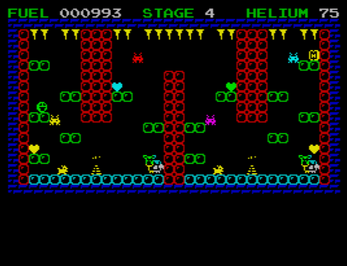 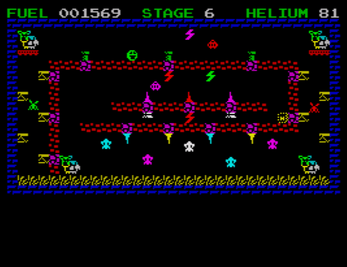 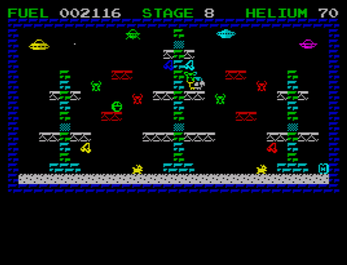 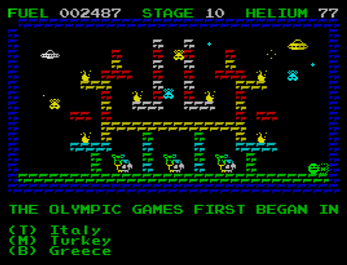